Protaccine currently has a portfolio of Anti-snake venom products and Thermostable vaccines.

Snake antivenoms are in acute shortage and in huge demand all over the world. Snakebite is a global catastrophe and one of the most neglected global health problems, with thousands of untreated victims dying or becoming permanently maimed in developing countries each year because of a lack of antivenom. It affects lives of around 4.5 million people worldwide every year; seriously injuring 2.7 million men, women and children, and claiming some 125,000 lives. In the recent past, two of the largest producers of Snake Antivenom stopped production completely, leading to a crisis affecting millions on our planet.

Protaccine is bringing to the world the First Auto-Injection for Anti-snake venom (ASV) for Travelers, Hikers, Workers in the  field & forest and for those it is impossible to reach hospital in time during a life -threatening /emergency situation caused by a deadly snake bite.

Besides being the first ASV to be presented in an auto-injection device, Protaccine’s ASV has the following enhanced features and advantages: 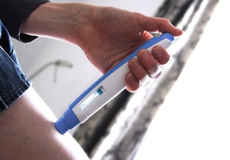 Currently most of the sera, vaccines and biologicals have to be stored in refrigerated conditions and more than 50% of these get wasted due to improper storage. Protaccine’s Tetanus, Meningococcal and Pneumococcal vaccines in Autoinjectors are thermostable in nature and could be stored at room temperature, eliminating the need for refrigeration.